﻿
Fresh and bright the New Focus project heralded the halfway point (11/10/2013) of the Whirlwind Festival at King's Place. After the audience had already devoured a plump meal of rich Jazz, they were in dire need of a cleansing breeze to reawaken their musical taste buds. Amongst the traditional quartet of sax, bass, piano and drums were the green shoots of violins, viola, cello and harp to give the crowd the chance of revival.

Playing from the their self titled debut album, we were immediately cast into a different landscape from the one we had trodden so far. The strings widened our blinkered perspectives to enable us see the horizon line rather than that which had previously been thrust in our laps. In poetic terms a chance to close the eyes and dream a little. 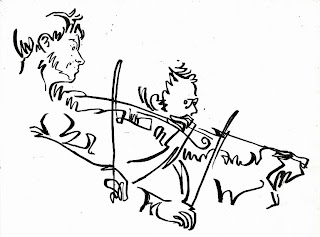 There was no chance of flying blind of course with a busy stage full of personalities and a short sandwiched set to negotiate. Front man Konrad Wiszniewski took the eye at centre stage but it was his writing and composition that left its mark rather than his stage prowess, except on their fourth tune "Music for a Northern Mining Town" when on soprano saxophone he was memorable. With more than just an echo in title with Basil Kirchin's "Abstractions of the Industrial North", there was a pastoral sound to this gritty theme, opening with Harp and then transporting us into expansive worlds.
New Focus' music helped us wander their set like a punter lost in the corridors of an arts cinema, opening doors onto imaginary letterboxed views.

None more cinematic than "El Paraiso" which started with a throaty jungle call from Michael Janisch on bass, rich and thick until the cello raised us into its lush canopy before the violins and viola dropped their threads of silk down with spidery dexterity.

Unfortunately I was stuck in my seat with only a view of Euan Stevenson's back, the hall was clearly filling up and spaces were more at a premium. I did however find myself attracted to the characterful Andrew Bain on drums in compensation. Difficult to capture but worth persevering with, he is a chomper, his mouth continually air biting as if he was a rabbit with a vitamin A deficiency.

It was an epic Finale with the penultimate "Dziadzio" juxtaposing a smiling Janisch, who was clearly enjoying himself, with a song that was a pinball of sadness and want.
The last tune "Parson's Green" with its chugging arrival like a underground train of ancient rolling stock, gave Stevenson's piano and Bains' drums the chance to shine after the introduction from the Harp's sweet levity.