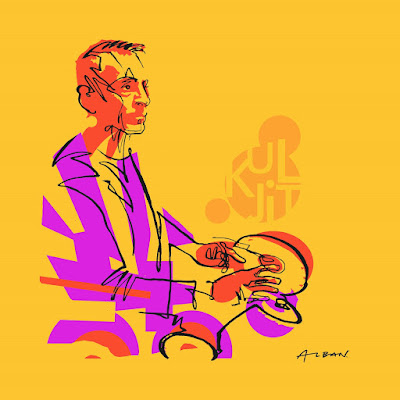 Trailblazing tabla maestro Kuljit Bhamra on this A World in London!
Click: https://www.mixcloud.com/Resonance/a-world-in-london-10th-october-2018/

Every time Kuljit appears on AWIL, I’m energised by his presence, just as I was when I first met him at Keda Records in the early 90s. His down-to-earth way of talking, wicked sense of humour, and authentic passion for music is infectious which is why he’s such a perfect advocate for the music industry as a whole. Kuljit is one of the most talented composers of our times, having written numerous Bhangra anthems, soundtracks for films like ‘Bhaji On the Beach’, as well as theatre shows such as ‘Bombay Dreams’ and ‘Bend It Like Beckham’. He’s the revolutionary & inclusive producer that made records with Indian women and not just men during the 80’s (Sangeeta Singer, Baldip Jabble, HEERA, Premi Johal,..), plus pioneered professional quality recording techniques in the Brit-Asian music industry. Eclectic and versatile, Kuljit has been a key player on the Jazz scene working with sax man Andy Sheppard and vocalist Barb Jungr, and he co-created a definitive history project – The Southall Story, with director Shakila Taranum Maan, about the part of West London known as ‘Little India’. Kuljit is an agile communicator in every sphere, but didn’t learn to read music as a child, so it follows almost naturally that he would be the best person to innovate a tabla notation formula – an unique invention providing a giant leap forward for demystifying Indian music. Maybe ‘Indian Drum Notation For Tabla’ will counter some of the exoticism about anything Indian too, and build more bridges in our world where predictive text still corrects tabla to ‘table’, Kuljit to ‘Colin’, and Ritu to ‘Rita’! Guaranteed that if anything fresh and interesting is happening, Kuljit will be at the heart of it, and now there are three new albums to mark the 30th year anniversary of his label, Keda Records: ‘Dhol Masters’, ‘Passage To India’, and one by his equally popular, singing mum, Mohinder Kaur Bhamra, titled ‘Songs For Punjabi Weddings’. Hear them, and their iconic creator, on this AWIL!!