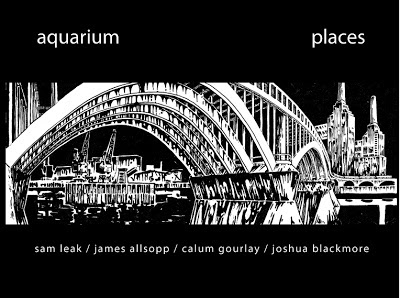 As I sat waiting for Aquarium to launch their second album 'Places' at Kings Place (12/01/2013) I was fully prepared for the journey ahead of me. I'd been lucky enough to be Aquarium's artist for their debut album creating an emotive charcoal driven portfolio of imagery to reflect Sam Leak's intense personal vision.
I was also fresh from listening to their most recent CD on Jellymould Jazz as Sam had pressed me into action to produce the album art (right) and an animation of 'Marrakech'. Just as my body had anchored me down into the sofa with the weight of mince pies I had to catapult myself into the sunshine and mystery of North Africa.

Obviously the journey ahead of the audience last Saturday was through the new CD but also encountering geographic and personal landmarks. None could be more poignant than 'Catherine Grove' which detailed Sam's mugging at knife point in early 2012.
﻿﻿
'Clutter' was also a favourite with the audience, its theme being Sam Leak's unruly bedroom.
Sam introduced all the tunes in his own modest style, usually with a self deprecating 'I hope you like it?' footnote to every announcement.
﻿
He is a delicate and careful player that has a manly gentleness about him with a mix of Mediterranean 5 o'clock shadow and British politeness. In fact, Sam told me a story about how he was saddled with an Aegean nickname,

"Someone came up with 'the 99 beautiful names for Sam Leak' which was basically a list of things that rhymed with Leak - Geek, Freek, has a beak, likes Dawson's Creek etc. It just so happened that one of the most popular ones was 'Sam the Greek' and one day I foolishy walked into school, post holiday, wearing a 'Greece' t-shirt - I didn't live that one down for a while!"

﻿ Front centre stage was occupied by the handsome James Allsopp who's presence was gentle and assured. If I could over-stretch the actor analogy just a little further, he cut a figure like a clean-living Rob Lowe.
﻿
﻿﻿
Back Centre was the domain of Calum Gourlay who quietly simmered behind his bass and a long bashful fringe.
﻿﻿﻿﻿﻿﻿To the right was a treat for any artist like myself. Usually drummers are hard to draw because of their constant movement especially their heads as they often bob and weave and shake uncontrollably. Some though like Aquarium's Joshua Blackmore (and Ed Richardson) possess an almost Egon Schiele like bone structure you can't help but get carried away with.

﻿
The journey ended when the lambswool jumpered quartet transported us to 'Milan' with a final encore through the mind of the man who composed these beautiful tunes, the 'Shy' Sam Leak.