After a month away from the Art and Jazz worlds it's good to be back. August was spent in France with a little bit of sketching, a generous amount of wine and plenty of swimming with the family. This year amongst the live sketches will be stories about the album artwork too. Mostly my own because I have access to the hidden artwork that never makes it to the public domain but hopefully other artists that I admire.

Today we start with Partikel's second album Cohesion that was released on Whirlwind Recordings in 2011.

A large part of my work portfolio is from musicians commissioning album artwork. The form of these album vary depending on the clients desires, their music or the label's in-house style.

The most straightforward album covers start and end with images of the musicians themselves, either done in the studio or live at a gig. Of course working at gigs is exhilarating and the paintings have a life of their own. When working in the studio, it is invariably in booths, where the musicians are isolated from one another but occasionally (and more enjoyably) they record as an ensemble, where I can be inspired by their interactions and sound.

As an artist the creation of new work is always an exciting moment. Not only the birth of the music but the concepts and images inspired by its final form. I start to familiarise myself with the material and group by attending both gigs, rehearsals and of course the recording session. Then once the tracks have been honed to an acceptable level, usually post-mixed but pre-mastered they are sent to me. I sit in my studio and listen all the way through the CD and make written notes. These are sometimes gibberish, occasionally beautiful in form but always helpful in visualising the music physically. The notes are easy to carry around, meaning I can flick through them, jogging the memory when a blast of inspiration hits. 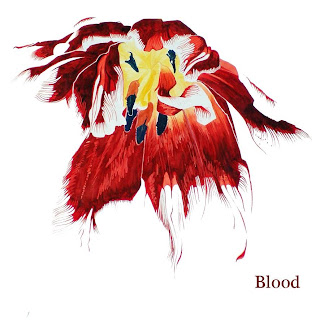 In this case I worked from a recording of a Partikel rehearsal, the day was 29th April 2011, our street was closed because of the Royal Wedding and below is what started to appear. 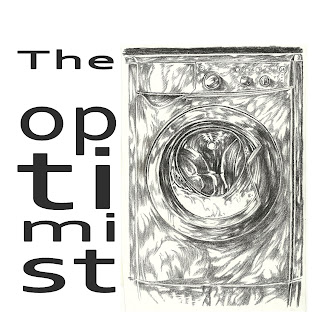 The Optimist
Rhythm
talking sweet, talking and talking
forgetting the time, then there's things to do
-when I'm having fun – we roll and pitch
There's that tune again
The best in front of the TV
I look out at the dust – or
maybe its the morning -
still there's a busy-ness
Bouncing.
The clothes go round and
round in the machine -
still wet when they come
out – I lay them on me
to keep cool – look like
a doll---dress me up, cheerful - 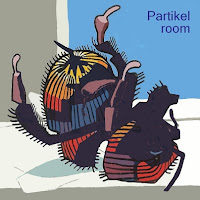 Room
Stretch it out
Birds in cages waking -
animals at the zoo -
I can hear the pelicans
the elephant is rolling around
the boar snuffing and
an animal rutting, rubbing,
picking, hitting all awakening
Food, Food, Food, Food
its around
eat in quiet 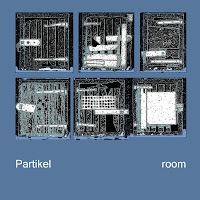 Grubs, insect crawling around
why can they escape
rattle the cage
wild lament
smell of the wild still
They wont take it from me.
I can still feel
Stretch out and taste the sun


'Room' ended up being the most creative of Partikel's tunes for me, creating several threads I wanted to pursue. The most effective was a group of cages I found and drew in the village of Cambieure in France, where I have my studio. These cages belonged to the wife of the Mayor, Mr Jacques GRUSZEWSKI, and I remembered seeing them there whilst completing a commission of his rose garden and house.

It was the choice of Partikel's Duncan Eagles, Max Luthert and Eric Ford and we developed it further into the cover and back listing too. The upside down tulip inspired by Blood became the CD image and it went into production under the close scrutiny of Whirlwind Recording's Michael Janisch.

Favourable reviews followed and the rest is history.... or not quite.
The trio are hitting the road once again before recording their 3rd album with new and old material alike. Starting with an appearance at the Whirlwind Jazz Festival on the 10th October and finishing with a string of Scandinavian dates in December 2013.
See more on their website.