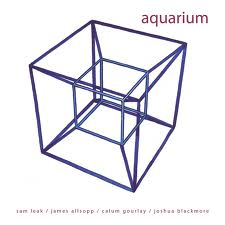 In the months before the Christmas of 2010 I was contacted by young pianist, Sam Leak, who had recorded his debut album with the shining lights of James Allsopp, Calum Gorlay and Joshua Blackmore under the name Aquarium. It was a heartfelt request from a intense man who was searching for an imagery he couldn't quite put his finger on.

Without ever meeting face to face you would think we started at a disadvantage, but Sam had other plans. He wrote me an honest letter, detailing a personal voyage of love fulfilled, unrequited and dashed upon the rocks. It was a letter that was so personal that I have never shown it to another person but it was full of depth and tangibility.

The sincerity of the written word is all to rare nowadays, so you can imagine the effect it had on me, and although images came to mind it never felt as if its sentimental load was heavy enough to illustrate Sam's personal journey. After a correspondence and a few false starts, Sam sent me an email with images of empty warehouses, railway stations with slanting shadows and views of pedestrians with backs turned toward the viewer.


The photographs were old and grainy, the definition wasn't good, and all were most definitely black and white. Sam wrote, 'Do you see what I see?'........
Well there was nothing to see, perhaps that was the point, these were empty spaces, devoid of real human animation but rampant with the emotional detritus from the human condition. This was the world of the voyeur, which was very apt for an album entitled aquarium.

It was a matter of getting out into the urban spaces where our lives are staged and to experience those scenes where the main protagonist has left...... and the clues of the story remain. Sam was brought up in the Kingston area so that was where I started, trawling trains, sketching madly trying to find a modern 'Brief Encounter'. You see here some of the images that were drawn but never used. Always in black and white, with the grainy grittiness that Sam craved.

There was a healthy amount of industrial props on my wanderings, that only emphasised the loneliness that we sometimes feel. Although the drawings are indistinct and 'lost', Sam had already found the concept for his front cover. He wanted the CD face to be a tesseract, which is the four-dimensional analog of the cube. Or simply put, the tesseract is to the cube as the cube is to the square.

Amongst these set of drawings was one of Grosvenor Bridge, which is the rail conduit carrying passengers in and out of Victoria in London. Colour versions have been a popular painting for me but this new charcoal version was very gloomy. In its darkest corner is Battersea Power Station which has become an unlikely icon for Londoners. We decided to shelve the image because of its dimensions. It just wouldn't work on a CD cover, where one was a square format the other was a snaking panorama.
The debut album was released on Babel in 2011 and was well received. 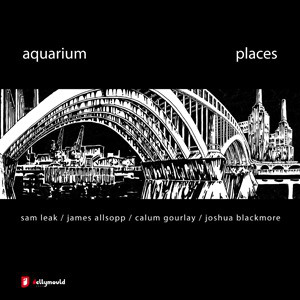 Eventually we met and I sketched him, although it took some time to get his profile just right.
To my surprise earlier this year he contacted me once again, asking if I could create an animation for his tune 'Marrakech' to help launch his new album 'Places' at King's Place.

I was seriously impressed by his latest compositions and wasn't at all surprised that Sam had given me just 10 days to complete the short film in. He often left this sort of thing to the last minute. Unexpectedly though Sam had already sorted the design and artwork for the album on Jellymould Jazz. It required a double take of course, but there was our bridge in confident graphic tones, it was strong and assured just like the album itself.

Once again Sam Leak's music reached out to pleasure critics and audiences alike.


"Leak clearly puts heart and soul into his writing, as well as his playing; the emotion and conviction are there for all to hear" Adrian Pallant, March 17th 2013 - AP Reviews website
“A band full of the great heavyweights we have on the young British jazz scene… a beautiful mixture of extraordinary playing… great grooves and extraordinary improvising. I’m a fan of this band.” Jamie Cullum
Rumour has it that Sam is embarking upon a PhD in Music Cognition at Cambridge University this year, lets hope this doesn't reduce his presence on the London and UK live music scene.
He would be sorely missed.
AL.