Earlier this month I was invited along to St George's University London by Tadhg Caffrey who is the Public Engagement officer on the Tooting campus. Since becoming artist-in-residence on their Simulated Mental Health ward at Kingston I had not visited the Tooting site and imagined it would also yield its stories under a close inspection. Psychotherapist Harvey Wells told me that I should embed myself in the corridor that links the University with its neighbour St George's Hospital and just watch what unfolds.

Tadhg Caffrey is on a mission to engage the public and spread the word wider afield, his raison d'etre is not only to ensure the most appealing and creative side of SGUL's work is accessible to the wider public and specifically our local community but also to do it with a certain joie de vivre.

Next month he showcases his 'Spotlight on Science' public event on 26th March where Professor Sanjay Sharma and St George's researchers will be discussing sudden death in sport. Although this sounds an emotive subject it was the ideas and ambition that bubbled on Caffrey's back burner that piqued my interest. His idea for a Health Comic Convention is a crackerjack, based around the award winning artist Emily Hayworth Booth. I can see this being a fascinating way to help patients explore the narratives of being ill, in hospital or even as a visitor or carer.

﻿
Before I settled down to my sketching I explored the inner sanctum of the University and hospital. In the library the hide of Blossom the cow, draped seductively over a vaulting horse greeted me like an experiment in crossbreeding tannered species. Then down into the dungeon to sweep past the morgue and into the Museum of Pathology, where rows of glass containers trapped their brains, intestines and deformed livers in a wonderland of inspiration for any artist. I was in heaven.

How I wish I could have sluiced down a tanker's worth of formaldehyde into the corridor that links St George's hospital and the university. It represents the perfect cross section of life in these two
establishments. At the corridor's furthest tip, deep in hospital territory the sun streams in through huge plate glass windows. Patients in wheelchairs sun themselves like lizards, capturing the rays as if they possessed life imbuing powers. A few mobile phone conversations ending in huffy silences and on more than one occasion I watched a telephone listener descend into an unscheduled siesta. 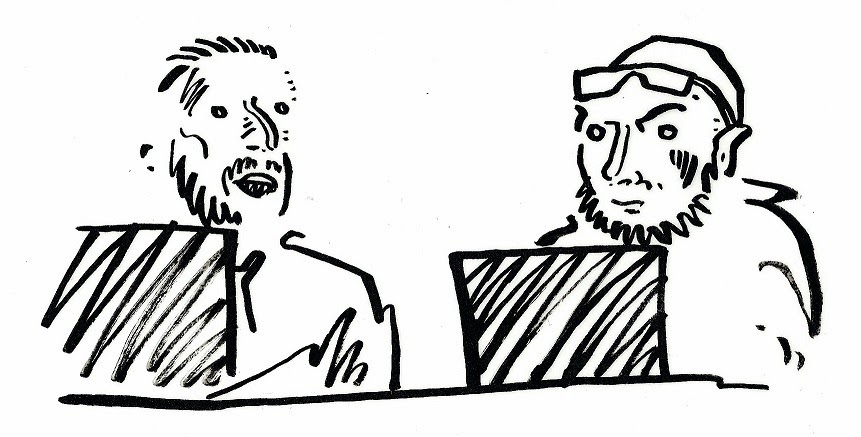 Everyone moved at different speeds along the corridor, a granny ambled in her purple velour tracksuit while a patients in blue robe, limped a little quicker, one arm dangling helplessly from under his hoody. Plenty of couples walked arm in arm, it was hard to tell who supported who, emotionally and physically. Two girls defied the hubbub, by using sign language to communicate in their own silent fishbowl world. There were regular visits to the ever cheerful receptionists who wielded their advice from deep within the belly of the corridor. After sitting next to them for 30 minutes you start to notice that their visitors either arrived undressing themselves or dripping long wet trails like slugs on Speed. 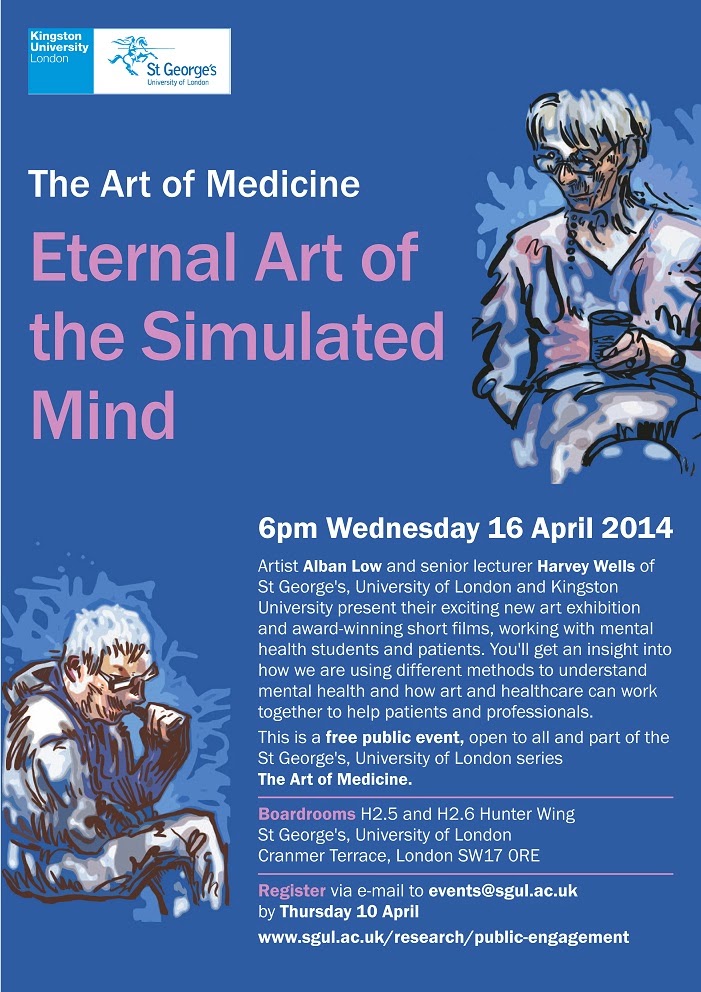 moments about how you could represent these narratives in one piece of artwork. I've already been working hard to do this since visiting the Simulated Mental Health ward in January, and new works are emerging on a weekly basis. We'll be presenting some of our recent creations at St George's University London on Wednesday 16th April at 6pm as part of the 'Art of Medicine' series of lectures and exhibitions. Please come and join us, it's open to all but you'll need to register before the 10th April. Details at www.sgul.ac.uk/research/public-engagement/

Its with great pleasure that I share the first short film to emerge from the residency, called 'Ping Pong Paranoia' (below). Harvey Wells and I recorded the 'patient's' monologues whilst on the Simulated Mental Health Ward and this has proved to be a springboard for creativity. The voice you hear is of  'Sandra' who is agitated and feels trapped in this ward environment. The excellent score is by Toy Rokit, who we will be collaborating with throughout the year.

At the event on the 16th April we will be screening 'Ping Pong Paranoia' and also our first film with poet Robin Vaughan-Williams.