The Carnatic Strings are the sinuous threads that tug the heart like miniature campanological hands lurking in the rib cage. Untrue of course, Carnatic is the adjective denoting the main style of classical music in southern India, as distinct from the Hindustani music of the north. These internet pages have never strictly adhered to what is reality and fiction, but lets start with some facts.

﻿
Four piece Raga Garage performed to a crowd of Carnatic lovers at the Purcell Room on London's Southbank (21/07/2015) in a smear of colour and cascade like an autumnal Hyde Park on a windswept day. Orange, browns and reds aplenty but also that puce that lingers on chapped cheeks were the sentiments and the vision. There was a glistening varnish to the perspiring brows of Jyotsna Srikanth (Carnatic classical violin), Robert Atchison (western classical violin), Shadrach Solomon (piano) and NS Manjunath (percussion).

Robert Atchison is a familiar entry in the sketchbook of this blog, more often than not seated amongst the London Piano Trio, under the high ceiling of St John's Smith Square. Tonight he was the beauty and the glide, the swell, the fall, the wind and more often than not the pace of this quartet. His violin created the broad threads that Jyotsna Srikanth cut through, she pierced him, re-stitched in a complexity that was part mathematics and part patchwork.

The violins trod different paths, as you would expect from animals born in separate cultures but they ran together too. Atchison had a squirrelling verve while Srikanth's poetic themes uplifted the spirit and made you want to dash your new found zeal against her rocks.

Away from centre stage and the obvious spotlights was where the percussion of NS Manjunath awaited if you so dared to enter his layer. He laid the road for all three of his fellow musicians, although excitingly it was not all a pathway of granite slabs but tilted and bucked as though situated on the San Andreas fault. More than once he broke it apart and brought it back together again like a cultured navvy who is daydreaming of jigsaw pieces.

In the obsidian night lurked Shadrach Solomon who was barely visible, he laid his notes of discord, and they were snares for the heart. Once caught, my mouth filled thick with the violin of Jyotsna Srikanth, she was tempting me to choke my doubts away and drink in big cinematic gulps of sweeten air.

See Robert Atchison perform the Beethoven Cycle with the London Piano Trio during October, November (2015) and January (2016). Details below. 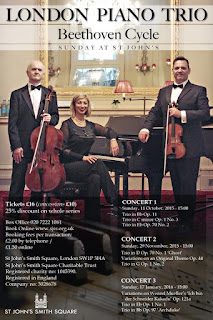