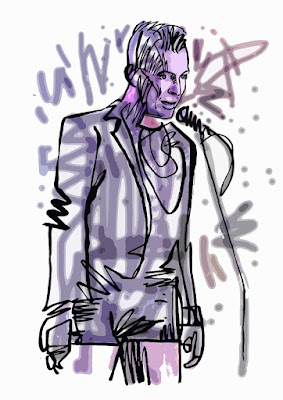 The King of the Cuissardes, JD Kelleher, romped the Dublin Castle into a writhing pit of sweaty bodies and leather glory on St Patrick's Day in Camden this year. Outside overgrown men bumped into one another in a drunken bagatelle but inside his lair Kelleher mixed passion and charisma to create an intoxicating brand of animal magnetism that drew everyone toward his bare-chested embrace.
Following his triumphant occupancy of the coveted No. 1 spot at the heights of the Irish Rock Chart with his debut single “Love Will Tear Us Apart”, along with his second single “Imagery” reaching No. 2 in the Irish Rock charts, JD Kelleher thrusts himself back to familiar territory at the top of the (Rock) pile with his most exciting release to date; “Avenge The Maybes”.

“Avenge The Maybes”, out now, is soaked in classic JD Kelleher swagger and defiance. Kelleher draws upon his rage, humour and character to deliver a truly powerful performance that strikes a unique chord with his audience across all platforms of performance.