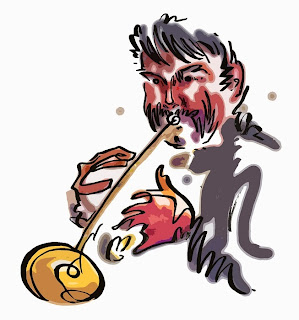 It's been over a year since South London bon viveur Paul Jordanous created his Jazz Jam at No.88 in Kingston. Strictly speaking this isn't your usual jam, more a spread of Funk, Soul with chunks of real Jazz to satisfy sweet toothed aficionados.

This night (14/11/2013) saw my first return since the epic 'Festival of Awfulness' of April earlier in the year. Well who could blame me, watching 12+ musicians singing instead of expertly playing their instruments takes some time to wash from the most stubborn of cerebral cortices. Here we had many of the offenders but tonight they were doing what they do best. There was the notable addition of special guest Mike DiRubbo, who had arrived from Paris a few hours earlier and was destined to return to New York, USA the following day.

Paul Jordanous is a fluid and talented improviser and composer with a bacchanalian streak that tightropes across the abyss of Creativity. On the first tune "Skip's Blues" he resembled a professional dart player, sending an early marker to regulate the classy standards and expectations. "Skip's Blues" had been a regular on Mike DiRubbo's short European tour and once again he jumped in with both feet. Despite just being assaulted by the 88's legendary Pie of Year, the chicken and leek variety, DiRubbo didn't let it dull his senses too much.

Once again the quiet man, Bill Mudge, was DiRubbo's second when a duel was in the offing. I would say he avoided the spotlight but the 88's atmosphere which is ideal for carousing is also excellent for the shy species which is the Mudge. Our seated bassist was equally concealed, Johan Hansen Larson, apart from his headstock which he waved like a naked flagpole in the breeze.


﻿ We were joined by Leo Appleyard on guitar, just days away from his London Jazz Festival debut at the Pizza Express, Soho. Here in more insalubrious surroundings his flush cheeked prettiness clashed against the sirens and night buses which veered along the A308 behind him, and he stood clear with both succinct support playing and placid visage.

The second set started with the tune of the evening, "Summation" with an early exchange between Larson's bass and south-coast fixer Ted Carrasco. There was a rambling deepness from the two with a brief quip from Appleyard before altos and the trumpet of Jordanous signalled the arrival of reinforcements with a Charge of Light Brigade attitude. Carrasco is the gaffer at the Southampton Modern Jazz Club, and with a rich line-up for 2013 and 2014 I'll be making the trip south in the next few months.

There was time enough after the serious Jazz repertoire to slink into something a little more sexy and Piers Green put on his glad rags with relish. Earth Wind and Fire's "September" put quick smiles on the 88 crowd's faces and sequins in our hearts. Even though I have all but forgotten the aforementioned 'Festival Of Awfulness' it is Green's "Careless Whisper" which still lives with me in my weakest moments.

﻿ We just had time enough to share a bottle of wine and "Summertime" with Annie-Grace Smith from the Belletones. The wine was courtesy of well-greased Adam, a total stranger who asked me to sketch his portrait. Despite my years sketching live I have never been propositioned in this way but you never say never and Adam walked away with an original pen & ink in his pocket. I on the hand spent the rest of the night in the company of a very palatable Sauvignon Blanc and the 'bon viveurs' who are Paul Jordanous' good time boys.