Earlier this month Mike DiRubbo touched down upon these shores with a short exploratory tour. It was his first experience of London and a great opportunity to hear more from this Rising Star (Downbeat alto saxophone poll 2013) of New York City's jazz scene. I had the pleasure of meeting Mike when I had my first New York art exhibition along 14th street in 2011. As I was alone in the Manhattan he took me under his wing, and introduced me to many of New York's hot spots.

Although he started at London's Jazz HQ, Ronnie Scotts, it wasn't until jetlag was dispelled and he had negotiated the intricacies of our public transport system that he really hit his straps. Two nights later (07/11/2013) we experienced the best of Mike DiRubbo along with Bill Mudge's Trio at the Twickenham Jazz Club. Rich in Italian heritage and dark looks his honeyed American drawl created a stir amongst the packed suburban crowd. 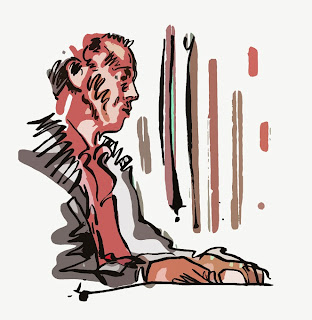 DiRubbo is a fluid player that needs to be teased into his most powerful performances and here at Twickenham Jazz Club he found an atmosphere that obviously suited him. It is a warm venue and the audience was bolstered by the Wembley wing of the DiRubbo azzurri. As we launched into "Skips Blues" I worked hard to capture the smokey eyes of our headliner, he is not a dominating frontman, but does take centre stage for long periods, taking us on extended expeditions into his compositions.

Bill Mudge as usual lurked in the gloom, he shirks the spotlight but I think he might have taken it too far as he peered intensely at the charts in the dark. I had not sketched him since May 2013 and he now sported a fuzzy winter beard like an arctic ferret, his beady eyes darting furiously. Third tune "Stellar by Starlight" just about summed up his predicament but it didn't set him back. By the fourth tune "Lilt" he was less Weasel more Sable, and his pelt shone with a soft shine of perspiration.

Matt Fishwick had started the DiRubbo tour at Ronnie Scotts but it is hard to ascertain if he was up to speed or not. He is the steadiest of individuals, barely changing pace, his rosey cheeks might go from Amaranth to Crimson and his lips become a little wetter when really in the groove. He was the perfect foil for his American leader with his dead pan demeanour.

Kelvin Christiane enlivened the front of stage dynamics with a frisson between tenor and alto. The Twickenham crowd know and love him which provided a shot in the arm for regulars Rob Gray and Lister Park. In contrast none of us were familiar with Joe Downard on bass, and we did not know what to expect. Well, he was thrilling, skilful and immediately made an impression upon the regulars. In demeanour he hides behind a flick George Michael (circa 1980s) would be proud off and has a lean cheeked physique that is de rigueur amongst early career Londoners. As you know I am a jazz twitcher and try to identify a player's 'trigger', the movement or idiosyncrasy when they are totally in the zone. Downard's is his mouth, with an expressive tongue which pops out like the Whac-a-mole game in its rapidity and frequency.

The tune of the night was seconder setter "Throwback" where Mike DiRubbo stretched clear, sweeping up the audience, tapping away with fingers, toes and heartbeats. Both Bill Mudge and Joe Downard excelled, the latter with hair flopping, drew his hirsute curtains and undressed an emotive solo which exposed the best in DiRubbo's composition.

We will be hearing more of Mike DiRubbo's writing in the coming months with a crowd-funding campaign in full swing, he'll be recording a new album in the New Year.
Check it out here. Until then we still had him at the heart of the UK's jazz scene for another week and it seemed the Twickenham crowd had given him the sort of welcome he deserved, generous and enthusiastic.