All Saints Day this year (01/11/2013) found a very healthy crowd at St Martins-in-the-Field's church to witness a mere mortal playing the piano, but to give him his due Juan Maria Solare is a very talented mortal indeed.

What a location to find oneself in, for Solare and the audience, no hymns or chants in this holy place but the sound of traditional and modern tango music from this Argentinian born but Bremen residing pianist and composer. The 250 strong crowd were mostly made up of Freedom-pass holders with a splattering of half-term families and a few couples escaping from their daily grind in the heart of London.

First, Piazzolla's "Calambre" had an uneasy hollow ring in the high ceilinged church but there was a perfect hush. Soon with little yips we felt more joyful, ultimately skipping on Juan Maria Solare's rolling barrel.
﻿
﻿

The next two were in traditional vein, Juan Carlos Cobian's "Niebla del Riachuelo" and Carlos Di Sarli's "Bahia Blanca" had more meat on their bones. The former swarmed in thick pathos and drama, and we felt a touch of a woman's involvement in this narrative. The latter was rounded like a plump flower, heavily laden with scent and each petal was a dancing melody as it cascaded at our feet.
﻿﻿﻿﻿
My favourite section of the concert followed, with two compositions from Juan Maria Solare himself, "Puma" sprang upon us, spikey as it tip-toed over shattered themes, with the beat of cinematic drama. Perfect for the hushed audience, here was suspense, a dropped key beside me, disarmed  pews in row 5-9 and we were blindsided. "Acuarelas junto al rio inmovil" was an empty bowl that slowly filled with tiny seeds, building imperceptibly until ground by Solare's pestle and ultimately seeping and oozing under his pressure. His compositions at the mid way point were the highlight of this short concert.

In appearance Juan Maria Solare is relatively unassuming and studious with a lush salt and pepper beard and hair tied back, he balances an air of business with a manly charm. Some pianists have an intensity which is frightening when you look into their eyes, they are a particular breed unlike any other instrumentalists. Solare's steely drive is buried a little further behind a dark brow, it is there but veiled by joy and flair. 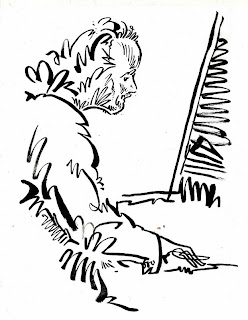 The melting glass of Luis Mihovilcevic's "Tango de los segundos y de los cortes" lead us into the running faucets of John Cage's "A room" and "Quest" as apartments fell and fragmented they reformed themselves in our eager imaginations. Squares built upon squares.

As Solare started his ninth piece he repeatedly reached into the piano's belly and plucked at its innards, setting the scene for Stockhausen's "From Tierkreis". An hugely engaging piece with its rapid painful cascade like sitting on a cactus. As the spikiness continued we found ourselves opening an abandoned music-box and a growing suspense made me watch the flickering candles of  St Martins-in-the-field and wonder if there was a lazy ghost who still lurked after last night's Halloween.

Wide in the mouth and rich on the palate, the juices ran free but just as the sweet dreams began Luciano Berio's "Wasserklavier" finished.

"6 kleine Klavierstucke op 19" was a snatching bump through the snickets of London just yards away, our scuffing feet brushed the delicate weeds of this schizophrenic city as we watched a youngster free his paper aeroplane into the autumnal winds, we too climbed. Finally the throaty "Raga" of Mauricio Kagel, waved an upbeat goodbye.

It is a real shame we do not hear more of Juan Maria Solare here in London but I believe the tide is turning and his contemporary tango is a fitting soundtrack to our 21 century existence. Inner conflict and clawing survival balanced against the bursts of fiery expression in the pockets of our lives.
Posted by Alban Low at 01:01