Earlier this month (17/11/2013) Mark Perry and Duncan Eagles launched their long awaited debut album as co-leaders. The pressure was on as this was no run-of-the-mill CD floatation, the venue was the Pizza Express, Soho and it was packed out with London Jazz Festival patrons. The first course had been served in form of the Leo Appleyard Quintet and now they wanted to sate their collective jazz appetites on the succulent main course.

﻿
I was lucky enough to be at the conception of Mark Perry and Duncan Eagles baby in Derek Nash's Clowns Pocket Studio and was also entrusted to complete the album's artwork. Alongside the dynamic duo at the Pizza Express we had Sam Leak (piano), Chris Nickolls (drums) and Max Luthert (bass). On the recording day itself the expert flute of Gareth Lockrane was in attendance and the roaming vocal sounds of Ola Onabule were added at a later date.

﻿
For this post I'll be writing a little about how we created the final artwork and exhibiting some of the designs that didn't make the cut. At Pizza Express they started with "Flip of a Coin" and that too is what kickstarts the album and my artwork. I try to create a response to each tune and early on this was considered as a possible album title.

The launch gig followed the album listing but after "Chord Game" we leapfrogged to the buoyant "Barter's Band". This tune is named after legendary South-West London band leader Bob Barter who I subsequently tracked down. Read about it by following the link here. The tune is one of my favourites and this image is a stylised interpretation of the Facebook profile images of Duncan Eagles friends. I can't remember who they all are now but I can see bassists Eric Guy and Holley Gray amongst them.

The idea for  "Forever" was inspired by the two main protagonist's running banter in the studio. Both unshaven they hurled quips and abuse at each other throughout the session. Perry in particular was thoroughly over excited, so I gave him the big end of the loud-hailer to minimise the effect on the more subtle Eagles.

"Remember" also offered a rich vein to tap into, and as an artist you are always looking around you for inspiration. In this case I didn't look far. The folds of the studio curtains when semi-closed offered me a slice of outside and a glimpse into a better future. That was the warning sign to get out of the studio and I hit the road. Drawing inspiration from the album's title "Road Ahead" I sketched the most forward thinking icon that was rising up from the streets of London. Look closely and "The Shard" that appears on the back cover also has line markings running down its centre. 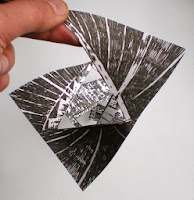 The architectural theme, The Shard and tower block stairwell I later sketched encapsulated both the future and the possible descent that can befall a jazz musician. The motif represented the dark edges to the music and by creating a model of the stairs I was able to twist it for real to gain that sense of vertiginous instability.

The final piece was the figure that emphasises the urban darkness. I blatantly borrowed it from a drawing by fellow artist Peter S Smith, who has mentored me since I was a fledging student. Peter's sketchbook drawings are unnerving personal renderings of his own shadow as he stands waiting for trains. They are both lonely and powerful.

Luckily the Quintet aren't running the gauntlet alone, they have teamed up with the nurturing F-IRE Collective to release this album. You'll be able to buy it in a week or two on Amazon. The reviews have been more than favourable and there are too many to post here but follow the link for the informed Mr Adrian Pallant's view on the matter - REVIEW.