The ARC Music record label looks back at forty years of global wanderings on this A World In London!
Click to listen: https://www.mixcloud.com/Resonance/a-world-in-london-21st-december-2016/

Somewhere in a little club in Hamburg circa 1976, a Bolivian band called Los Rupay played their first European gig. The promoter, a young guy called Horst Tubbesing marvelled at their pan pipes and charangos and wondered why they had no LPs on sale for the rapturous audience to buy? Horst immediately remedied the situation by forming ARC Music, initially selling dubplates from the back of his Citroen 2CV! Subsequently, since the 70s, no corner of the world has remained untouched by the hand of this brilliant, independent label, fuelled by passion for every kind of genre, and driven by expertise & dedication to reach the remotest musicians on Planet Earth. Listen to ARC’s PR guru, Angie Lemon, and A&R man, Diz Heller, on this AWIL, playing some of the choicest tracks from the back-catalogue! Hear about the rewards they’ve encountered being part of ARC’s family-orientated team, now led by Horst’s daughter, Julia Beyer, and some of the challenges faced through four decades of continual change in an industry not for the faint-hearted. Plus, the ultimate challenge of AWIL’s annual festive quiz set by London Gypsy Orchestra’s Norman Drucker! See what 2017 holds for ARC’s 41st year on ARC music FB, www.arcmusic.co.uk Twitter:@ARCMusicProd

Amongst red drapes and electric blues The Hamiltons reflect in the mirrored art deco facets of the Crazy Coqs. Saturating the packed audience in a wash of cocktail light we could be forgiven for stepping back a century or two. This isn't an old Parisian scene though, it is a Lynchian stab in the past. While young men upend bottles of champagne to impress friends and tipsy ladies whisper in ears, on stage the twin peaks of The Hamiltons tread the line through a modern nostalgia. Beware, the décor may lure you into it's cosy arms but the hypodermic prick of The Hamiltons' charisma can still draw blood.

Since deciding to relocate from Sydney to the U.K with a one-way ticket in 2015, a lot has happened to this formidable duo. They found themselves some quirky musicians to complete their live act: a tubist, drummer and guitarist, which compliments perfectly Emma’s jazz tinged vocals and shredding accordion skills, and brother Tom’s masterful, frenzied piano chops and husky voice. They have performed all over town, toured the country opening for Matt Cardle, and even collaborated with Guy Chambers on some interesting projects. Let’s throw a few more quirks into the mix. They grew up playing country, cajan, jazz, folk, and 60’s music in their fathers’ band, and debuted in Australia with an exceptional French album (they are half French!) which Van Dyke Parks called “a total triumph on so many levels”.

The Hamiltons perform with a manic passion, tinged with nostalgia but cemented in a pop tradition. “We take a genre of music we like, and turn it on its head” says Tom when asked to define their musical genre. It’s the kind of music best to be heard than described. Their single “Take The Hit” showcases their eclectic taste and even features sax parts from Max Abrams (from the Grammy-Award winning The Mavericks). 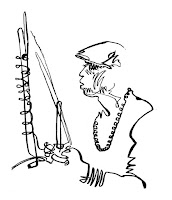 Described as “An Innovator" by The Guardian, Guitarist Ant Law was a scholar at Edinburgh University and Berklee College of Music. He now lives in London and works extensively with his own quintet, as well as (Grammy-winner and Chick Corea sideman) Tim Garland's “Lighthouse" (along with Jason Rebello and Asaf Sirkis), and with saxophonist/composer Paul Riley and Trio HLK.

For those of you who like their art as much as the music then have a read of our piece about Ant Law's album artwork for Zero Sum World.
http://artofjazz.blogspot.co.uk/2015/02/ant-law-iza-turska-zero-sum-world.html

Riverside Arts Jazz is a relatively new night on the London Jazz scene. Held on the first or second Sunday of the month it draws a healthy crowd from the banks of the Thames. It is run by local fixers Janet McCunn and Terence Collie, who are also responsible for the TW12 Jazz Festival and Jazz Café Posk.
www.moodindigoevents.co.uk/

Future Jazz at Riverside Arts
8th January 2017 - Tribute to Michael Brecker
Ten years ago following a two-and-a-half year illness, Michael Brecker passed away at the age of 57 in January 2007. As a result of his stylistic and harmonic innovations, Brecker is the most influential saxophonist of the last 30 years and is among the most studied contemporary instrumentalists in music schools throughout the world today. He is also a 13-time Grammy winner. Riverside Arts Jazz pay tribute to him by playing selected tracks from his solo albums. This concert will feature self-confessed Brecker lover and brilliant tenor player Sean Freeman (Level 42).
Posted by Alban Low at 06:09 No comments:

The London Lucumi Choir - A World in London

Afro Cuban harmonies and bata rhythms by The London Lucumi Choir on this A World In London!
Click here to listen: https://www.mixcloud.com/Resonance/a-world-in-london-30th-november-2016/

The day began a bit pear-shaped when London Lucumi Choir’s creator, Daniela De Oshun locked herself in the bathroom. Fortunately she escaped to bring her merry flock of choristers to AWIL, sharing lead vocals with Mish Aminoff and special guest Yosvani Diaz from Havana. Many of LLC’s members have held a long term fascination for Cuba, echoing the salsa dance craze that swept dance floors worldwide  in the 90s after Buena Vista Social Club won a Grammy and Wim Wenders documented their collaboration with Ry Cooder onto celluloid. For some, salsa was a waist-slimming fleeting fad, whereas for others, Cuba became a lifelong passion to explore beyond  Revolution,  Raul, and Fidel Castro.

LLC is one of the outfits that  digs deeper into Cuba’s past,  beyond sun-soaked beaches in Varadero and hip-gyrating, to  explore the legacy of the West African slave route, Yoruba culture and Orisha tradition. Along with this dedicated community choir, two awesome albums have emerged from this exploration – ‘Un Solo Palo’ and ‘Lullaby For Naila’ -  with a third is on its way in January.

You’ll be the first to hear extracts from it if you head down to AWIL-Live on December 9th when LLC perform at The Southbank Centre and bathroom visits by Daniela are strictly prohibited. www.londonlucumichoir.com  https://www.facebook.com/events/338138769897098/

"Simply World Class" is the description made by the German press of the London Piano Trio. For the past 17 years the London Piano Trio have been touring, recording, and teaching across the globe to rave reviews. Upcoming tours include a 10 city tour of China in 2017 and a Far East Tour in 2018. At home they have been described as a "National Treasure". They were artists in residence at the Gibbs Music Festival from 2008 - 2014 and current activities include a residency at St John's Smith Square in London, recently featuring a critically acclaimed 2015 Beethoven Cycle and artists in residence at the Festival Jalesnes, Venantes, France.

Their interest in promoting English music has resulted in them recording the complete trios of Donald Francis Tovey, Henry Cotter Nixon, and Cecil Armstrong Gibbs, with many premiere performances in places such as Dubai, Singapore, Manila, Naples, and Paris. They have actively commissioned works by composers such as Christopher Gunning, Jed Balsamo, Gavin Bryers, Clement Ishmael, Constantin Papageorgiou, Giya Kanchelli and Philip Glass.


Ziggurat
Angled dunce hats rise before us in corrugated rooftops.
Worlds within worlds, cup cake frills and spiked edges,
A spiral staircase is chopped into black and white confetti.
Escher stairs fold themselves in an impossible origami.
Shadows cut over bannisters and raining down in shards of black.
Free running world of concrete shadows.
Back and forward, build and conquer.

Will Gibson (b.1986) is a London-based saxophonist, clarinettist & composer. He began clarinet, piano & writing music at an early age. From 1996-2005 he attended Junior Trinity College of Music in London on Saturdays, where he continued his instrumental lessons & studied composition with Cecilia McDowall. He took up saxophone around the age of 14 after becoming more influenced by jazz & in particular John Coltrane. He also joined the Pendulum Youth Jazz Orchestra, where a large part of the repertoire was by Kenny Wheeler. During this time he was awarded the Chappell Prize for Composition, the Hambourg Prize for Improvisation & won the European Piano Teachers Association Composition Competition.

From 2005-2009 he went to Trinity College of Music where he obtained a BMus (Hons) in performance. Here he studied with Mark Lockheart, Julian Siegel, Michael Whight, Fiona Cross & Andrew Poppy. He became involved in ensembles from both jazz & classical sides, & was awarded the Ronnie Verrell Award for Big Band & the Wilfred Hambleton Clarinet Prize.


Since graduating Will has performed extensively throughout the U.K. & Europe in various bands & projects. In 2012 he was awarded second place in the Worshipful Company of Musicians Dankworth Prize for Jazz Composition for his big band piece Solicitudes, which was performed by the Trinity College of Music Big Band in Ronnie Scott's.

The artwork from Will Gibson's new album Facets will be part of an exhibition of album art at the Robert Phillips Gallery, Walton-on-Thames from 13th-22nd January 2017. Free entry.
Exhibition details click here