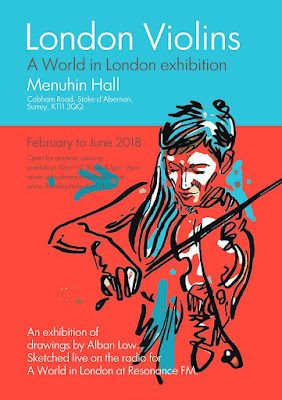 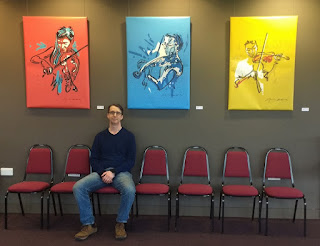 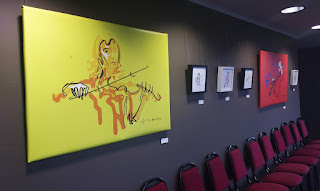 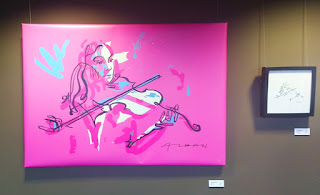 Pharoah Russell is well known to London music scene lovers and especially to Effra Hall Tavern and Agile Rabbit regulars as a fine and versatile young drummer. Last night at Upstairs at The Ritzy (Brixton) he launched his debut EP Air To Breathe, a four tracker full of creativity and laidback positivity.

Russell has been part of the London scene for many years, cutting his teeth with Britjazz trio Partikel in the noughties. Past/present collaborations and credits include The Noisettes, Emiliana Torinni, Cirque Du Soleil, Congo Natty, Shabaka Hutchings, Jeremy Warmley, Agaskodo Teliverek, Damo Suzuki, Thidius, Andrew Ashong, Aar Maanta, Mr Jukes, Jack Tyson-Charles, Kokoroko, Ese and the Voodoo People, Errol Linton and more. This EP shows a new side to Russell, a facet that reveals his considerable skills as a multi-instrumentalist and explores a new found talent for singing and song writing.

Customers at Waitrose Kings Cross are being treated to a free jazz concert every Thursday night. The London Granary Square store is part of a recent re-development of the area next to the Regent’s Canal. The store (a converted railway engine-shed) already boasted a wine and beer bar and outside patio space.

Giorgos Pafitis - Youthful guitar with forward fruity flavours, handsomely bodied with good balance. Blended from a selection of the Cyprus Military Band, London College of Music and the Trinity Laban Conservatoire to give his music that ripe crunchy fruitiness, youthful vibes and harmonious spirit.

José Canha - Elegant toasty bass gives his music the perfect frame for a charming and lingering night. A plummy rich talent from Portugal that displays meticulous care in every aspect of creativity


Demi Garcia Sabat - Smooth complex and beautifully aged this percussionist delivers a remarkable intensity on the ears with ripe and smoky complexity. The sound is silky soft with wild moments of spice and toasted tones.

The award-winning, Manchester-born singer-songwriter Albert Man has established himself as one of the most creative songwriters on the London gig circuit. He performed at 12 festivals over the summer of 2017 including The Great Escape, Camden Rocks, Liverpool Sound City, Reverb Festival, Tramlines and Standon Calling. He also organises his own music festival, Music Makers Festival,
www.musicmakersfestival.com.

Albert Man was featured on Best Of British Unsigned as “one to watch” for 2017 saying they “love Albert's sound”. This was swiftly followed up with him being chosen as their featured artist of the day twice and has been nominated for 'Best Unsigned Male' for their Unsigned Music Awards 2017.
Man had a sold out launch at St Pancras Old Church for his 2017 EP ‘Nothing Of Nothing Much’ (www.albertman.com/nonm) and the live recording has been released as a live album called 'Live At St Pancras Old Church' (www.albertman.com/live). His 2016 self-produced album 'Cheap Suit' (www.albertman.com/cheapsuit) won the 'Best Independent Album' award on the Alternative Friday blog.


Saarloos a new Irish band consisting of critically acclaimed songwriters, Brian McGovern and Craig Gallagher. Having formed a formidable songwriting partnership they felt a desire to perform their songs together onstage.
Gavin Wigglesworth, known professionally as Gavin James, is an Irish singer-songwriter. He was born in Dublin on 5 July 1991 and grew up in a household surrounded by music. James' great-grandparents were opera singers and his grandfather was a stand-up comedian and whistler. He began playing music in a rock band at the age of 8 and writing his own songs. By the age of 21 he began focusing on his songwriting and playing open mic nights. In 2013, James independently released the single "Say Hello", which won the Meteor Choice Award for Song of the Year. By 2015, James had signed deals with Sony in Europe and Capitol Records in the US.

Hattie Briggs is a 24 year-old singer, songwriter and multi-instrumentalist.

Since making the decision to drop out of a Russian degree in her second year at Oxford University after being shortlisted for a BBC Radio 2 Young Musician award, she has released several EPs, two albums, had airplay on BBC Radios 1, 2, and 6 Music, and embarked on tours around the UK, the Netherlands and the U.S.

The Gary Willcox Quartet has been playing together since 2008. Each member has developed strong individuality and profile through years of experience playing with many of the UK’s leading jazz/folk artists (Iain Ballamy, Gilad Atzmon, Bobby Wellins, Brian Finnegan, Ian Shaw). They play a mixture of original material & material of some of the masters of the idiom (e.g. Charlie Parker / Wayne Shorter) , arranged for the band’s own purposes.


Born in 1972 and from Shepperton, Middx, Gary Willcox started playing the drums when he was 10 years old, with encouragement from his father, himself a musician. He quickly became fascinated with the great jazz drummers Buddy Rich, Max Roach & Art Blakey and through them discovered the whole world of Jazz. In 1988 Gary started formal drum studies with renowned drum kit teacher Trevor Tomkins. Gary went on to study orchestral percussion at the Royal Welsh College of Music & Drama. Gary has been playing around UK & European jazz scene since the mid ’90’s, performing with the likes of Jim Mullen, Ian Shaw, Chris Batchelor, Chris Biscoe, Iain Ballamy, Alex Garnett.

Part of In the Round at the Roundhouse (Camden) Portico Quartet performed music from their fourth studio album Art in the Age of Automation, as well as luminous classics from their much loved back catalogue, and live debuts of previously unheard new music.

Mercury Prize-nominated Portico Quartet have always been an impossible band to pin down. Sending out echoes of jazz, electronica, ambient music and minimalism, the group created their own singular, cinematic sound over the course of three studio albums, from their 2007 breakthrough Knee-Deep in the North Sea, and 2010 John Leckie produced Isla, to the self-titled recording Portico Quartet in 2012. Now rebooted as Portico Quartet, with the return of Keir Vine on hangs and keys after a brief spell as the three-piece Portico, the group released their fourth studio album Art In The Age Of Automation on forward thinking indie jazz and electronica label Gondwana Records in August 2017. It’s been hailed as possibly their finest album yet, with the band simultaneously delivering both a return to their mesmeric signature sound and fresh new sonic departures in their new music.


A double-bill of sensational bands on this A World in London - Bahla and TootArd!
Click to listen: https://www.mixcloud.com/Resonance/a-world-in-london-31st-january-2018/

Bahla opened our show with their wonderful atmospheric concoction of cinematic jazz weaved around Jewish folk music. This five-piece group was formed in London just two years ago by Venezuelan pianist Joseph Costi and guitarist Tal Janes. Along with Andrea Di Biase on double-bass, drummer Ben Brown, and the sublime vocals of Ines Loubet Franco from Portugal, they’ve just released their debut album, ‘Imprints’, and you can catch them on tour across the UK from February 2nd. Their London date will be at Pizza Express in Soho’s Dean Street on February 27th! www.bahla.co.uk

Next up on this AWIL were Hasan and Rami Nakhleh from TootArd, who’d just flown in from Paris and are set to play Rich Mix on February 1st! TootArd’s superb album ‘Laissez Passer’ has stirred up a whole heap of excitement on the international scene since it emerged last year. Their tracks marry rock guitar with classical Arabic sax,  painting in Maqam riffs and Levant-tinted desert blues, filtered through deep dubby Reggae bass lines and compelling Maghreb rhythms. This charged and infectious winning musical formula of traditional meets urban has been handed down from their father and gleaned from YouTube, whilst their lyrical themes centre around the natural world, love, and travel. This latter point is a poignant one for TootArd having grown up in the occupied Syrian Golan Heights. Their idyllic small village in the Majdal Shams mountains is constrained by borders yet inhabited by people restricted by their ID pass - Laissez Passer - leaving them effectively stateless & without a sense of belonging. But in TootArd’s case, their bold, unique, and inventive sounds qualify them as citizens of the world-class musician community, and fortunately for all of us, a musical passport to freedom. Find out more here: https://www.tootard.com/ Facebook: https://www.facebook.com/tootard/