Striding into the arena of the Twickenham Jazz Club last week (19/12/2014) was the handsome and manly Simon Spillett. It was the final bout for both the TJC and myself in 2013, a Christmas party of sorts that was mercifully short of festive melodies but full of good cheer.
﻿

It has been a healthy first year on the Art Of Jazz site, with plenty of variety from within and outside the Jazz fraternity. In fact the most popular entries have been those about my time on a Simulated Mental Health Ward at Kingston University. Fine Art exhibitions and album design work still occupy most of my time so it is always a balancing act. The body is weak sometimes after a night sketching followed by family duties and a day in the studio. Nevertheless the site has been visited 20,000 times in 2013, with the Whirlwind Jazz Festival in October the pinnacle of the year.

It was a fittingly breath taking night to bow out. Simon Spillet resplendent in a black winter beard looked more like a suited gladiator than a jazz frontman. With an air of Crixus about him he was combative in both technique and speed. His microphonic patter has a dark humour that matched his hirsute appearance. The opener for the quartet was 'The night has a thousand eyes' and our gazes were indeed trained on heartthrob Mr Spillett who roamed the stage like the love child of Grizzly Adams and one of his bears.

The man who always attracts our attention and a favourite amongst the TJC crowd is Roger Beaujolais. Despite the tenderness of the second tune 'My Funny Valentine' Beaujolais extended a high whip, really putting his shoulder into the thrashing of his vibraphone. He exploded from the gates on 'A Night in Tunisia' (from Simon Spillett's most recent release Square One). It was the cue for a Spillett attack, his delivery as quick as a jelly sliding off a plate. You caught a handful of notes in you mitts before it slid through your fingers, he was so rapid, but it was Beaujolais who broke the mould. On Clifford Brown's 'Sandu' he slid off his glasses and let down his hair for this meaty groover. When at full tilt Beaujolais has a tendency to part the mouth like a Page 3 model and moistens his lips in the most alluring of poses. An unlikely flaxen haired sex symbol. 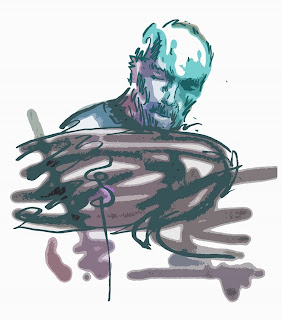 Alec Dankworth on bass made his mark later in the second set. His playing on 'But Beautiful' (Jimmy Van Heusen) was more satisfying than taking a rich long draw on an illicit cigarette. With his unflappable persona and those happy/sad eyes he remained somewhat of an enigma.
﻿

Trevor Tomkins brought in his own fan club to swell the already bursting audience numbers. Despite a couple of visits to see him at his Red Lion residency in nearby Isleworth, he has been an absentee in my sketchbook all year. Even though he was bathed in a deathly ghoulish light his performance was anything but undead. If the lights had been dimmed any further you could still have identified Tomkins' silhouette. With a head that often lists to the left and a shoulder that kicks like a mule trying to dislodge a troublesome fly he has a Zen aura that radiated to the back rows of the Twickenham Jazz Club. I wish that he could have been my Mr Miyagi when I was bullied at school for being a teenage Acker Bilk lover.
﻿

We all had an early Christmas present when Kelvin Christiane came back to join us after his enforced substitution due to Mallet Finger. He is the Club's Spartacus and with Lesley alongside him they once again packed The Bloomsbury pub. It has not always been this way and the TJC has seen ebbs and flows this year. What is encouraging is the new faces amongst the regulars and I sketched a bestubbled Mike who was accompanied by a bevvy of beautiful women.

I will leave the final word to Twickenham Jazz Club double act, Andy Rock & Colin Kyte. Sitting on the front row like iconic Muppets Statler & Waldorf, the aforementioned Rock turned to Kyte and said
"Spillett and Beaujolais are so fast and furious they're bucking the trend and shedding a few pounds before Christmas".

Like the rest of us I've started the slimline regime after the festivities and I'll be ready for action in the New Year.

See you then.
Alban