As a regular sketcher on the 'live' music circuit I encounter all kinds of performances but last month I was given the opportunity to immerse myself in a new 'cutting edge' experience. On February 5th and 6th 2013 I sketched students, lecturers and 'patients' on a Simulated Mental Health Ward.

My host was the Tutor and Psychotherapist Harvey Wells, who I have previously worked with on many a Public Art project, and most recently on his book 'Therapeutic Interventions For Mental Health Professionals', published by Sampson Low Ltd.


This was an opportunity to observe the real experience of students diagnosing, managing and interacting with not only one patient but several in a high octane ward scenario. As you can imagine a mental health ward is going to be pressurised, so the stakes were high. In society we're very much aware of recent NHS criticisms and failures in the care of some Mental health patients in the community. Here then was a chance for the professionals of the future to dive into the ward's melting pot. If they got it right it could save a patient's life, if they got it wrong then.... well you already know the wider implications.

﻿﻿
As I arrived there was a palpable tension in the Sir Frank Lampl Building at Kingston University. It was a unique opportunity for the students and everyone was full of nerves. First the motley crew of Facilitators were being briefed on the day ahead. The man in the middle was the charismatic Chris Hart, he leaned on a grey hospital crutch like a general who arms himself with a battle weary swagger stick. He was very much the Lee Marvin of mental health trying to weave the squad in front of him into the formidable 'Dirty Dozen' of Simulations. There were more than a few Telly Savalas lookalikes too in his bunch. These were practitioners who had been invited from Mental Health's mosaic of professional disciplines, paramedics, hospitals, prisons and universities. 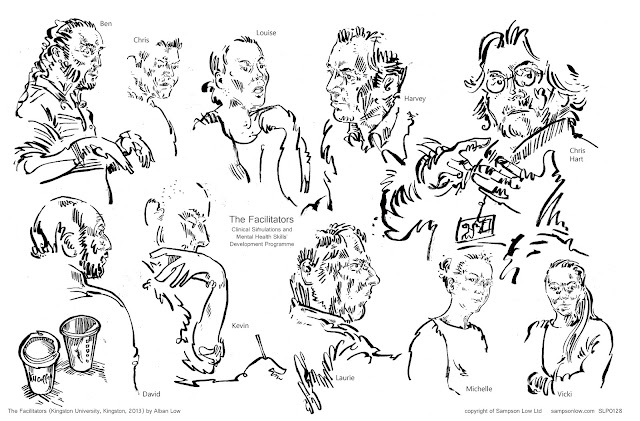 Next I was introduced to the students who were split into smaller Ward teams (12 students), to better tackle the unique challenges ahead of them. They started to discuss the patients in their charge and assign a Traffic Light code for swift and easy action. As the meeting progressed it became clear that all but one of their 10 patients would be RED.

Now if you hadn't already guessed this was going to be a simulated experience for us all. Meaning that the role of the 'Patient' was going to played by an actor. You would think therefore that this would be like a normal performance where the audience sits back in voyeuristic comfort. Not one bit!

As the students discussed their patients they became more and more tangible.
"He cut his throat 25 years ago, he's very difficult to engage, recently divorced."

"She was very frightened she would be killed. She has assaulted other patients and twice threatened nurses. She self harmed from the age of 12"

The discussions went on for a long time, the layered personalities needed dissecting and assessing. In a break I discussed the phenomenon of the patient's realness with facilitator Kevin, and he remarked
"Sometimes I feel I know these imaginary patients more than the students themselves. The patients start to take on a life of their own the more we discuss them".

The final stage of the day was a nerve wracking experience for all concerned. In a true act of Theatre one student was chosen to conduct a clinical session with a patient while we all looked on. Imaginatively called a Fish Bowl interview, this had every chance of being as slippery as an eel if things went awry.
'Peter' shuffled in and the room went quiet. He was agitated and with hands thrust deep into his pockets he made his excuses to leave before a word was uttered from the nervous student in charge.
"my bus is leaving in 10 minutes"
He was defensive.
"My doctor doesn't know anything about me"
The student did very well to tease more information out of 'Peter'.
"People are talking about angels here, it's a strange place"
"I hear voices on the TV"
This was a difficult experience, through the glass walls of the fish bowl we could see the student flounder a little. He was processing at least 4 different thoughts in his brain...what is 'Peter' talking about? What does it mean? What's the next question? and what should I do to help him!

It felt like an eternity but after 15 minutes the session was over and we all let out our collective breaths. 'Peter' took off his wooly hat and became the likeable actor he really is.
We all felt a little more relaxed but we all knew that tomorrow would bring a bigger challenge.
A Mental Health Ward filled with 10 more 'Peters' and their personal problems and potential explosive actions.

BUY Harvey Wells' latest book, Therapeutic Interventions For Mental Health Professionals HERE.
(I'll be writing up my second day of Simulations soon, keep an eye out for it)
﻿