Beauty and the Beast took to the Water Rats stage on Wednesday this week (27/02/2013) in the guise of Gabi Froden and Phil Wilkinson from Foreign Slippers. This was not a reincarnation of the musical that left London's West End in 1999 and now had returned to downtown King's Cross. Nor a hard worked metaphor, that reflects the attractiveness of the duo themselves, although each was bathed in contrasting lights that emphasised their differing roles.

The Beast...... the dark electronic beats of Wilkinson

It was a night of juxtapositions. Gabi Froden was glowingly beautiful under the red spotlight but her lyrics have a chilling and melancholy feel at times. She has a deadpan relationship with her audience and you cannot help but be captivated by her Scandinavian delivery. Like the mouse that is being toyed with by the cat, you know you are in her thrall although within a playful grasp. But unlike the mouse you never want to escape.
Froden bookended the night's performance on guitar but spent the majority on keys. 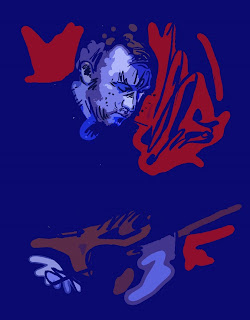 Phil Wilkinson lingered in the blue shadows cast by Froden but should take just as much credit for the night's excellent performance. For this duo it was an opportunity to warm-up and energise new material ahead of a tour with FOY VANCE, starting tomorrow at Newcastle's Cluny.
Tour dates here.
Wilkinson's brave electronic beats were at their most effective during 'Road to Ruin', the sound of them crunching and spitting out at us. Musically it was an almost tactile path through Blake's 'And did those feet in ancient time'.
Froden's voice was the rolling hills of a 'Green and pleasant Land' and Wilkinson's cloud of beats erupted from those 'dark Satanic Mills'.
Froden and Wilkinson weren't persistently at loggerheads either, their voices regularly combined creating smooth folk landscapes.

Amongst the Water Rats' Greek columns we heard some modern material too, including 'Sleepwalker', written by Wilkinson. Earlier in the evening Gabi admitted to me that she finds it hard to accept Phil's ideas when first presented to her -

"I'm very critical at the start when Phil conjures up a new song for us. I find it very hard to own a song that I haven't written but eventually I fall in love and it becomes part of my identity too".

I had been invited this evening by a 'Face', as they say on the circuit. Whether I have achieved that honour yet I do not know but this face belonged to Mike Watts, who as a supporter and photographer of live music is a regular on the folk circuit and beyond. He is a man (usually with his wife Gail) that can be seen at many venues, listening to any genre, but with a keen ear for the New.
He has followed the progress of Gabi Froden (particularly her collaborations with Duke Special) for a while and gave me an insight into the music.

"When she takes the high notes her voice retains its fine quality but with a touch of vibrato, it just has that accuracy and tone! The most memorable night was at Belfast's Waterfront where she sang Ruby Murray's 'Jimmy Unknown' in front of two and half thousand people with a 26 piece orchestra behind her".

﻿
Both Mike and I left a healthy crowd at The Water Rats with Foreign Slippers and their manager Phil 'Leveller' Nelson. I never know whether this nickname was earned because of his previous management fame or because he has that imposingly strong demeanour. Answers on a postcard...

Although Mike and I got lost on the way home, I know we'll find each other again soon. I'm his guest at Ben Castle's gig at the Pizza Express, Soho on 8th March.

Your next chance to see/hear Foreign Slippers here in London is on the 13th March at the Islington Assembly Halls. See if you can resist the potent wave of Gabi Froden's voice and Phil Wilkinson's dark beats.